Fentanyl Deaths Continue To Rise in England and Wales

The latest statistics from ONS (Office for National Statistics) have been released and show there has been no positive impact on the number of deaths from drug-related deaths from 2016, the previous year.

In 2016 England and Wales were hit by the highest number of drug-related deaths ever recorded, with 3,744 individuals dying as a direct result of drug-related poisoning or overdose.

2017 sadly saw a marginal increase in 2016’s figures. A staggering 3,756 deaths were registered with ONS last year; once again a record number of drug-related deaths for England and Wales combined.

Fentanyl deaths for England and Wales rose by a whopping 29% in 2017. Clearly indicating that illicit synthetic opioids are spreading across the UK.

Why Fentanyl deaths are rising 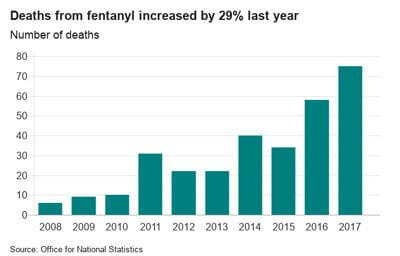 Fentanyl entered the UK heroin market a few years ago. Ever since its introduction, deaths from Fentanyl have continued to rise.

Fentanyl is an extremely powerful synthetic opiate, it is up to 100 times stronger than Morphine. It is usually only prescribed for end of life patients such as terminally ill cancer patients, or patients that have developed a tolerance to Morphine.

It is not Fentanyl’s prescription that is causing drug-related deaths in the UK. Prescriptions for this controlled Class A drug are monitored very carefully and there are strict indications in place for prescribing and administering.

Deaths from Fentanyl are happening because this violently strong narcotic is being cut with Heroin and sold on the streets to Heroin addicts and heroin users.

Drug dealers are making more money by reducing the amounts of Heroin needed by adding tiny amounts of Fentanyl. Fentanyl is up to 50 times stronger than street Heroin, sometimes more.

Heroin and Fentanyl dealers are also creating an addiction that is extremely hard to break due to the levels of high physical dependence. Dependence on this drug keeps those addicted coming back for more.

Fentanyl – The next level in drug oblivion

Heroin users in the UK are being offered the next level of oblivion; many are not even aware at first that the Heroin they are about to use has been cut with Fentanyl – until they use it, by which time it is sadly too late.

Many of the Fentanyl-related overdoses result from users who use Heroin mixed with Fentanyl for the first time. Thinking they are injecting their usual dosage of Heroin to which they have a tolerance to, the added Fentanyl sends them over and in some cases, they die instantly.

As with any opiate, addiction to Fentanyl can occur within 3 to 5 days of daily use. This is a very short time frame in which they become tolerant to the new stronger and deadlier mix of opiates and therefore dependent.

Synthetic opiates cause a substantial rise in hospital admissions

If we compare statistics from when comparable records for drug poisoning deaths first began, it is plain to see that England and Wales have entered a frightening new stage in opiate addiction. Consequently, as opiate use and addiction has grown so has the number of opiate-related deaths.

Fentanyl has hugely contributed to the phenomenal rise in synthetic opiate-related hospital admissions in recent years.

The fact that the death toll for Fentanyl-related deaths has risen significantly over the past two years is a major cause of concern for all.

Heroin users need to be aware that each time they try a different batch of Heroin or use Heroin in a different area of the country, that the Heroin could potentially be contaminated and cut with fentanyl.

As with any addiction, the correct medical and therapeutic treatment is paramount to recovery. This is particularly true of Fentanyl addiction which causes a huge physical dependence to develop quickly. Fentanyl detox and Fentanyl withdrawal are extremely difficult and unpleasant, even more so than Heroin.

More and more private rehab centres in the UK are treating patients for a Heroin and Fentanyl addiction; often Methadone dependence is also in the mix as the user has made failed attempts to get clean in the community.

As a major drug rehab provider, PCP has adapted to expertly treating Fentanyl addiction as more and more cases walk through our doors. The patients that come to us for Fentanyl detox help we consider to be the lucky ones. There is little hope for a Fentanyl addict trying to get clean in the community at present.

If you or a loved one are struggling with an addiction to Fentanyl we can help. Our private drug rehabs provide a full medical drug detox for those that are Fentanyl dependent. Furthermore, we offer a full bespoke Fentanyl drug rehabilitation programme to help safeguard against relapse.

Recovery from Fentanyl addiction is possible; we suggest you do not delay seeking professional treatment, the life expectancy of a Fentanyl addict is highly unpredictable. Contact PCP today for more information.

Next Post UK Public Back Legalisation of Recreational Cannabis In Poll 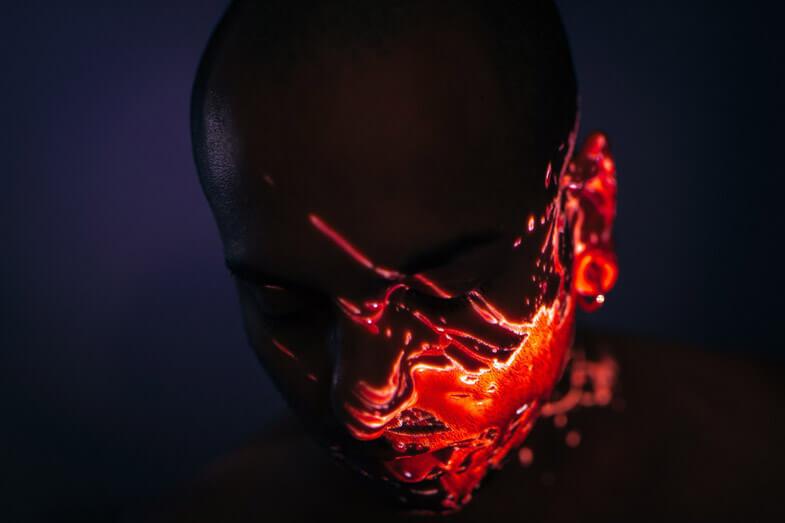