What Is Fentanyl? And, Why You Should Never Take It Even Once.

The introduction of Fentanyl into the UK’s Heroin market has had a devastating impact on the number of opioid-related deaths in England and Wales. The past few years have seen a breakout of Fentanyl-related deaths especially across the North East of England. Today the drug is now widely available across the UK and has filtered down to London and Southern areas of England as well as Wales.

“We do not fully understand why fentanyl is being introduced as an additive to heroin, to what extent users are aware of the addition, or whether there is an emerging demand for it. US and Canadian analysis suggested that the introduction of fentanyl into their heroin markets led to rising demand and profit margins, but the UK market differs from North America and we have not seen any evidence to date of UK heroin users demanding fentanyl-laced heroin.”

The indications so far, are that most individuals overdosing instantaneously on Heroin laced with Fentanyl were not aware that the heroin was contaminated with this extremely powerful opioid narcotic drug.

Fentanyl is a very powerful synthetic (man-made) opiate drug, which is gram-for-gram between 50 and 100 times stronger than heroin. In medicine, it is used as an anaesthetic as well as a strong pain killer, normally in the form of patches. It is also used as an anaesthetic and sedative by vets. Fentanyl is usually also only prescribed in the most severe cases of pain and then only under severe medical supervision. It is also used overseas to medically treat the end of life patients with terminal cancer.

Easily Obtainable Online and On The Street

Sadly, the drug is easily available on the Dark Web, an internet network of highly untraceable and hidden websites, blogs and forums. Buying drugs such as Fentanyl and so-called “Legal Highs” can be done with just a few clicks.

In recent years, the drug has been manufactured in illegal labs in Mexico and China. Often, it is used to cut heroin without the user’s knowledge, leading to up to 47,000 US deaths in 2014. The drug is now taking a strong hold in the UK.

What’s even more disturbing is that dealers are now adding the drug to more common street drugs in order to boost their effectiveness, including cocaine, fake Xanax and fake Valium.

Three men have admitted to selling #fentanyl & #carfentanyl via a #DarkWeb business online. The trio sent drugs across the UK and worldwide through the post. https://t.co/L8E6kKSWMs pic.twitter.com/5Wrso7ujiF

Fentanyl and Heroin-Related Deaths in The UK

The added strength of Fentanyl to street Heroin means that, by taking the same amount of Heroin that they are tolerant to, the mixture of the two drugs instantly causes overdose and death if immediate medical treatment is not received.

The withdrawal from Fentanyl is so awful and life-threatening, that if an opiate addict tolerates it, they are likely to return to the same dealer again and again in order to get the required Class A opiate strength in order to sustain their addiction and avoid the horrific withdrawals.

Using Fentanyl that is illicit and non-prescribed really is dancing with the devil.

Using illicit Fentanyl and Heroin causes many deaths through unintentional overdose; the stats speak for themselves:

Below is a great 25-minute BBC documentary on Fentanyl that is compulsive, yet disturbing viewing.
Caution: Contains adult themes and upsetting footage.

If you are a Heroin addict is it vital that you access life-saving treatment immediately. If you are taking Heroin that is laced with Fentanyl, the need for treatment is even more pressing.

A non-medically assisted withdrawal from Heroin is extremely unpleasant and whilst there is a definite danger of life-threatening symptoms developing, it rarely kills. Withdrawal from Fentanyl is an entirely different matter, withdrawals can and do kill; medical help must be sought if you wish to quit the drug. 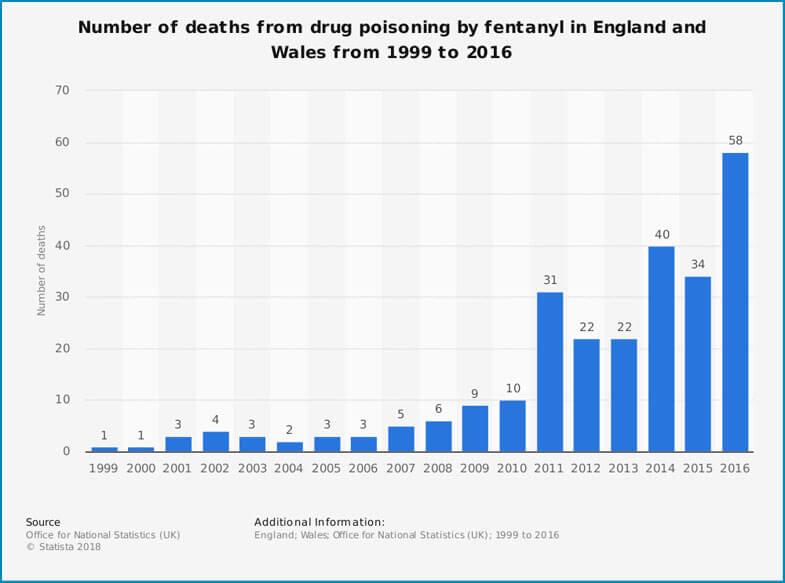 The safest place to detox from Fentanyl is within a drug rehab, where you will not only receive high levels of medical support but also counselling and therapies that will support your ongoing recovery.

Detoxing from Heroin or Fentanyl is only the beginning; a relapse on either or both is what often causes overdose due to reduced tolerance levels from a period of abstinence.

It is paramount that you undergo a full drug rehabilitation treatment programme in order to stay clean and rebuild your life from scratch.

If you or a loved one have an addiction to Heroin or Fentanyl and want help to stop, please call us for immediate life saving and affordable drug rehab treatment.

There is a life beyond Heroin and Fentanyl, there is a way out. Call us today.

Next Post The Cost Of Drug Rehab in London

14th July 2018 Am I A Functioning Alcoholic? Read More