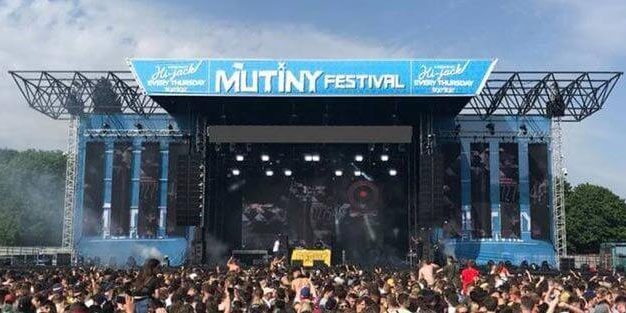 A batch of fake drugs caused 13 hospital admissions and two deaths at the recent Mutiny festival held in Portsmouth. The mother of one of the teenage girls, who tragically died after taking two pills from the fake batch of drugs, spoke out to raise awareness in the hope that future festival goers would think twice before purchasing drugs.

Georgia’s mother Janine Milburn posted a heartbreaking plea on Facebook urging others not to take drugs, hoping that others would be stopped from “ending up the same”.

“If nothing else I hope what has happened to her will deter you from taking anything ever.

“The pills had caused her temperature to rise so high it made her fit for 45 minutes.”

Ms Milburn added: “My little girl was 18 and full of life.

“I just hope this stops at least some of you from ending up the same.”

Georgina Jones was new to drugs and to her mother’s knowledge, this was the first time she had tried them. She sadly died after a 45-minute seizure following consumption of the illicit drugs. Another youngster, Tommy Cowan, 20 also died as a direct result of taking drugs from the same batch of pills.

The organisers of the annual Mutiny festival, held over two days in Portsmouth, released a statement regarding their decision to close the festival early:

“The safety of our amazing customers has always been paramount to us and so to keep everyone safe and in respect to those who have passed, we have taken the decision not to open today.

“As you can imagine, this decision was not taken lightly and was taken with the support of the local statutory authorities who we continue to work with.

“Enquiries are being made into the circumstances of what has happened, but we must reiterate our advice to all our customers to responsibly dispose of any substances.”

Fake and counterfeit drugs are rife in the UK and are responsible for many deaths each and every year, and not just at festivals. They can be obtained from the internet and also from street dealers. They are often the start of a drug abuse problem or drug addiction. In some cases tragically one pill can be enough to kill.

Buying Any Drug Is Dangerous

Unless a drug is prescribed for you by your doctor for a genuine medical condition, buying any counterfeit medication or drugs is extremely dangerous.

Fake drugs and medicines are man-made in illegal laboratories, with no safety regulations in place whatsoever. They often contain a mixture of poisonous household substances and other drugs that are unregulated.

There have been numerous cases of large fake drug hauls being seized over the past year by the UK authorities. Drugs seized in separate incidents this year include fake Viagra, fake Xanax and fake Benzodiazepines.

Not only are fake drugs extremely dangerous to take, but abrupt cessation can result in life-threatening withdrawal symptoms.

Prevention always starts with education, it is important that parents educate their children around the risk of alcohol and all drugs, not just fake counterfeit ones.

The chances are that if you have a child, at some point in their teenage years they will be offered a drug, usually by a friend or a relative. Educated teenagers will be able to make a responsible and informed decision when faced with this.

If you suspect that your teenager is already taking or buying fake drugs, it is vital that you address this immediately and do not dismiss it as just a phase. Seek help from your GP if they are under 18, who will be able to refer them to your local NHS drug and alcohol services for children (CAMS).

If they are 18 or over then they are old enough to undergo drug rehab. In a case such as this, please call us to find out how we can help with one of our affordable drug detox and rehabilitation programmes.

We cannot stress enough how important it is to take action if your teenager or someone you love is taking drugs. Drug addiction is a life-threatening disease, and with so many counterfeit drugs available, drug addiction is deadlier than ever before. The NIH (National Institutes of Health) is reporting record drug poisoning mortality rates in England, Scotland and Wales.

Rehab Today by PCP can accommodate immediate drug rehab admissions and offer detox and rehabilitation from all manner of drugs and alcohol. Call us today to take life-saving action!