Ant McPartlin To Return To Rehab After Drink Driving 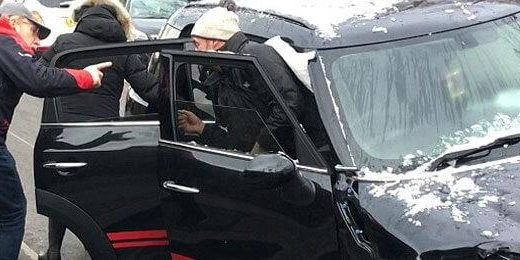 Ant McPartlin To Return to Rehab, After Car Crash Arrest Linked to Alcohol

Ant McPartlin OBE, 42, a successful TV presenter, actor and producer has hit the headlines again and this time not in a good way.

On Sunday 18th March 2018, the TV star was arrested following a three-car crash in which he lost control of his new black mini at a roundabout and drove on to the opposite side of the road. Subsequently, Ant was arrested after failing an alcohol breath test.

We can only imagine the devastation that this will have brought to his family, friends and fans, but can only hope that something good will come out of this, in that Ant realises that addiction is a serious life-threatening illness and that it only ever gets worse.

Ant’s car was left a wreck having hit two other cars in the incident. An eye witness filmed Ant and his mother getting out of the crumpled vehicle looking dazed and confused. Ant was certainly looking worse for wear and visibly dishevelled.

The Saturday Night Takeaway presenter, who has been awarded an OBE, checked into rehab in 2017, for an addiction to alcohol and Tramadol (an addictive painkilling opiate drug). At the time, Ant was quoted as saying he felt ashamed and that he had “let everyone down”.

He also stated: “I have spoken out because I think it is important that people ask for help if they are going through a rough time and get the proper treatment to help their recovery.” Ant subsequently took time out after admitting his problem and attended a rehab treatment programme.

Within a short space of time Ant was seemingly back on his feet, back in the public eye and back on our TV screens; doing what he does best with his lifelong best friend and co-presenter Declan Donnelly.

Ants recent relapse on alcohol and drugs has raised eyebrows in the public eye; being arrested for drink driving has black marked his previously squeaky clean record.

Ant’s seemingly out of character behaviour put the lives of two families at great risk, as well as his own. This is not an uncommon characteristic of addiction, to not think how your consequences could potentially harm others.

One of the drivers of the cars involved in the crash, a father, who had his wife and young daughter in a car seat in the back, was hit head-on by Ants car. He has said:

The father’s anger is completely understandable, given that someone could have been seriously injured or even killed as a direct result of Ants actions. Yet Ants actions are somewhat characteristic of an individual suffering from alcohol addiction.

The others involved may find that their physical wounds heal quickly, but psychologically there will be a long-lasting impact.

You may think that your judgement is not impaired, you may think you are invincible, you may think “I’m ok”.  I’m sure that Ant had similar nonchalant thoughts himself before getting behind the wheel of his car.

No matter how obvious or how bad your addiction to alcohol or drugs is, your brain can still convince you “I’m ok”, even when it is clear to others that you are not.

Once this kind of delusional thinking has been established in an alcoholic or addicts brain, it is very difficult to undo. There is a definite mindset that the vast majority of alcoholics and addicts will identify with.

Addiction doesn’t care who gets hurt, it takes over and consumes the person’s life, driving them to break every moral code they ever had and act in a way that they never would have imagined.

Addiction is a medically recognised illness of the brain; there is no quick fix or cure.

Our experience is that recovery needs to be maintained a day at a time and perhaps the presenter should have taken more time out of the public eye to concentrate on himself and his recovery.

No Amount of Money Can Buy Recovery

Addiction can affect anyone, regardless of age, gender, upbringing, race, religion, social standing and class.

Over the years we have seen many celebrities tragically die from addiction to alcohol and drugs; we sincerely hope that Ant does not become another statistic and this time, he takes the time out needed to concentrate on his treatment and recovery, first and foremost.

The Cost of Addiction

Ant, from South West London, has been in the public eye since he was a teenager. He met his closest confidant and friend, Declan Donnelly, on the hit children’s TV series Biker Grove, in 1990.

The dynamic duo has since become a household name in the UK and has had many successes due to their undeniable TV chemistry.

Ant and Dec have built a multi-million-pound empire together. Yet Ant, who previously had the undying support of the nation and more money than he could ever possibly need, has not been able to save himself from the grips of addiction.

What is Next For Ant?

It has been reported that Ant is planning on checking back into rehab; we hope that this is true and that perhaps this time he will concentrate on himself and his recovery wholeheartedly.

Addiction may not be a choice, but recovery is. Ant will have to choose recovery on a daily basis and make some big changes if he is to get and stay well.

Make no mistake, addiction is a chronic life-threatening illness that will take over your every waking moment and change you into someone that even you do not recognise.

It takes effort and commitment in order to overcome addiction and that not just initially; recovery is for the rest of your life. If, like Ant, you fall for the idea that you can drink or use safely again, and that somehow this time “it will be different”, think again.

I’m sure that Ant would want others to learn from his mistakes and seek treatment sooner rather than later. After all rehab treatment can not only save your life but the lives of innocent others that you could unintentionally endanger whilst in active addiction.

If you or a loved one have a problem with alcohol or drugs and need professional help, please call the Rehab Today by PCP rehab team now. Don’t think that Ants story will never happen to you, addiction is a progressive illness, that left untreated only ever gets worse. Save yourself and others the pain, misery and suffering and get help now.

How Rehab Today by PCP Would Help Ant

For an individual that is used to living their life through social media and the public eye, it is vital that they are disconnected from this whilst they undergo intensive addiction treatment.

Rehab Today by PCP has treated celebrities in the past, and we always encourage them to take as much time out as possible and live a low key profile whilst they concentrate on getting well.

Stress is proven to be a major trigger for relapse; we teach coping strategies on how to deal with stress and encourage our clients to put their recovery first at all times. Treating Ant as a celebrity in rehab would not help him to get well. It’s his addictions that need to be addressed through a full medical alcohol and drug detox and bespoke intensive rehabilitation programme. Treating the underlying causes is imperative to the healing process.

Rehab Today by PCP would encourage Ant to stay within the safety of our alcohol rehab environment for as long as it takes for him to understand that he needs to apply what he learns from our treatment programme to his daily life.